Lucidity Festival in Santa Barbara California has set the trend for Transformational Festivals on the West Coast and throughout the United States.With its third installation, Lucidity Universe will take place April 11-13 in the Live Oak Campground. Lucidity has a reputation as a top notch intentional gathering and as a “Leave It Better Event”, which […]

Lucidity Festival in Santa Barbara California has set the trend for Transformational Festivals on the West Coast and throughout the United States.With its third installation, Lucidity Universe will take place April 11-13 in the Live Oak Campground. Lucidity has a reputation as a top notch intentional gathering and as a “Leave It Better Event”, which means they’ve taken the concept of “Leave No Trace” and evolved it to leave the land better and to have positive impact on the community. The festival website has this to say about their event: “This is a Pack it in / Pack it out event. Our motto is to leave it better than we found it. If you bring garbage or packaging we ask that you plan to pack it out when you leave.”

Lucidity started when several members and groups within the Santa Barbara arts scene got together to collaborate and grow as a united entity.  It is an “Open Source” festival that hosts Burn-inspired theme camps and participant-curated stages, sanctuaries, flash mobs, and impromptu galleries. This aspect allows artists, healers, yogis, and all other co-creators to freely express their craft and grow their careers in the process by being active participants, not just consumers. Everyone who attends Lucidity is offered the opportunity to leave the festival a more consciously lucid and altogether Awake being, so that they may take this positive impact out into the world to help others prosper. As top notch as Lucidity is, there is always room to push the envelope further to live more completely in harmony with our Mother Earth. (Photo credit: Burly Brothers Woodworking https://www.facebook.com/BurlyBrother)

In an act of noteworthy transparency, Lucidity’s facebook page announced (March 27th) that the bamboo utensils sold at Envision Festival and available at Lucidity, due to a laudable effort by both organizations to put an end to single use, much to their chagrin ended up arriving “in a plastic cover, inside smaller plastic bags, inside a plastic bag, in cardboard, shipped from across the world”. In light of this honest mistake, arises the opportunity for a creative solution towards regeneration. How about festivals call on local artisans to bring handmade utensils, bowls, costumes, and ponchos to vend, gift, or share to eliminate single use? Maybe a theme camp could construct compost loos for the festival (as Boom Festival in Portugal does) to eliminate port-o-johns and donate the humanure to a local farm after the event. Who knows how to turn those plastic wrappers in which the utensils came into a baller upcycle costume or turn used aluminum cans into small rocket stoves instead of just recycling them? 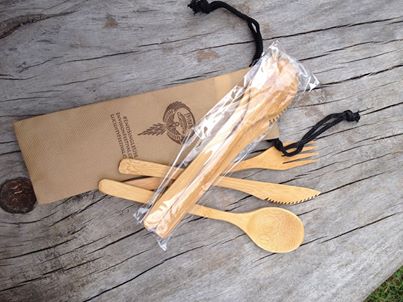 This is a proposal for festival producers, creative reusers, and co-creative participants to share and revolutionize resources so the regenerative trace can be a present tense reality at more festivals. Who’s bringing a rainwater-harvest-mobile, powered by biofuel from food vendors, to a transformational event this season? We can make Transformational Festival 2.0 happen in the Open Source spirit of Burning Man and Lucidity instead of waiting for festival producers to make all the changes themselves. Festival Production is a LOT of work. As co-creators, we have the opportunity to help bring the next level of positive trace to these festivals.

The hope is to have more festivals to model their positive trace after like Tribal Alliance Retreat in Costa Rica. This event was held on a permaculture property called VerdEnergia. Participants were supplied with locally grown vegetarian meals, used all reusable utensils, and no alcohol or substances were on-site. Medicinal teas, herbs, tinctures and herbs were flowing from the kitchen! Adding an additional source of grounding, facilitated by Project Nuevo Mundo, break-out groups for networking and pollinating land based projects proved to be accelerating to many attendees projects and empowering to those with new visions. The entire retreat was an excellent example of revolutionizing resources and a powerful integration of internal, spiritual growth mixed with project percolation and leadership empowerment

Fusing this “closed gap” ecovillage blueprint with the open source positive community immersion of Lucidity is the truly transformational direction that all next level gatherings must strive toward if we are to celebrate our lucid consciousness and still work to regenerate and live harmoniously with our planet and its bountiful resources.

If we want this to happen, we have to stop waiting in the wings, waiting for someone to make the change for us. Let’s come together as a community. Let’s lay out a plan of action. Let’s use the tools at our disposal. Let’s meet in the TCN Intentional Gatherings Guild group and answer the call to create a list of criteria for what makes a gathering “conscious” or intentional! Let’s write down what it will take, and by whom, and how, and let’s do this! Let’s harvest from the collective consciousness that perfect recipe for how to Awaken the Dreamers and Dream the Awakening…